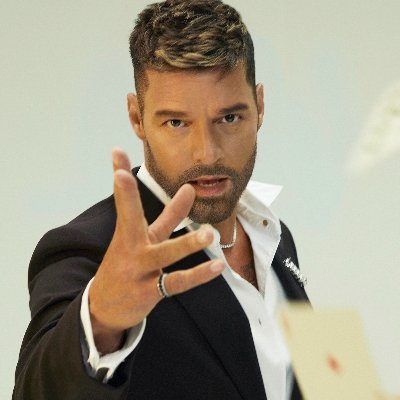 For many years, there has been only one place where I am in touch with my emotions fearlessly, and that's the stage. Being on stage fills my soul in many ways, almost completely. It's my vice.

I am convinced that music, like philanthropy, bridges hope.

Buddhism has a very beautiful teaching that says the worst thing you can do to your soul is to tell someone their faith is wrong.

What I like about Broadway is that you are still entertaining. You're standing in front of an audience every night and the critics are not friends at all - and that's good for me as an entertainer because I want to grow. It also gives me the structure of remaining in one city so I can get creative in different ways.

I believe we have to bring Broadway a little Latino flair. We have to keep it alive.

Proud to say that I am a fortunate homosexual man.

I have been a victim of stereotypes. I come from Latin America and to some countries, we are considered 'losers,' drug traffickers, and that is not fair because that is generalizing.

I canceled a show once to be with someone that I loved.

Amongst the qualities a hero should have, I would include determination, loyalty, courage, perseverance, patience, focus, intrepidity and selflessness.

I eat everything, that's a problem. I don't have discipline. My favorite dish is the Caribbean. Meat, rice, lots of grains. But I do like to do exercises. Lately, I've been having capoeira classes and lots of cardiovascular exercises, such as jogging and cycling.

I was onstage with Menudo since I was 12 years old. To us, the most successful one was the guy with the most fans. If you moved your hips and the girls screamed, you were getting it right. Who wouldn't want to be like Elvis or Jim Morrison!

When someone isn't ready we must not try to force them out. People are being bullied and committing suicide because they're gay and it's horrible.

Heroes represent the best of ourselves, respecting that we are human beings. A hero can be anyone from Gandhi to your classroom teacher, anyone who can show courage when faced with a problem. A hero is someone who is willing to help others in his or her best capacity.

Before I came out, I had a lot of anger. For years people would ask, 'How are you doing?' and I'd say, 'Good, fine.' It's show business, and that's what you have to show.

I don't want to dream anymore, I want my life to be real!

When you take things too seriously, you get old. You have to be silly. Whenever people say, 'Hey, man, are you ever going to grow up?' That's when you know you're doing things right.

My goal is to think of nothing when I'm writing a song because too many influences could sabotage a potentially amazing song.

These years in silence and reflection made me stronger and reminded me that acceptance has to come from within and that this kind of truth gives me the power to conquer emotions I didn't even know existed.

I am a fortunate homosexual man. I am very blessed to be who I am.

I think religion is a bunch of hooey, and I think that the holidays are an opportunity for people to get stressed out, getting their rush to shop. It's so conformist.

Every night, you fight for that standing ovation at the end of the night. And if you do something wrong, the domino effect is chaotic. And you must not allow yourself to make mistakes whatsoever. So in that case, theater, it's fascinating because of the discipline that you need.

Buddha's teaching are very simple, you don't have to break your head to understand the message. The part that I like the most from Buddha's teachings and from His Holiness, The Dalai Lama, is that the most powerful weapon is to not attack, to be able to have self-control.

During my sabbatical, I spent two years not listening to my songs at all.

You can be a sex symbol through music or film. Hey, there are some politicians that are sex symbols. Is that something you should fight? No. Sex is very natural.

I hated it when people tried to force me out when I wasn't ready. It was very painful, and it actually pushed me away from doing so.

If I had spent a quarter of the time that I spent manipulating my sexuality in front of a piano instead, I would be the most gifted piano player of my lifetime.

One day I'm riding a bicycle in my neighborhood, the next day I auditioned for Menudo and was on a plane to perform in front of 200,000 people.

For many years I thought I was bisexual. And then I would ask myself, 'What is bisexual? Does that even exist?'

I've felt emotions onstage that I never felt before; it has strengthened me as a person and as an artist.

New York City is an amazing place to raise children.

A lot of people say, 'Wow, you're a single father of twin boys, that's crazy!' Two toddlers can get hectic, but I wouldn't change it for anything. Every day they teach me different things. The love is there. When you have a two-year-old saying every other hour, 'Papi, te amo. Papi, I love you,' it can't get better.

I believe Barack Obama has shown a deep conviction to help those most in need, even if their voices are not always the ones heard the loudest in Washington.

Broadway is another monster. I've been touring since I was 12 years old and I love being on the road - one day you're here, next day it's snowing, and the next you are in a desert and it's 110 degrees. So I guess I'm kind of used to the madness physically that you go to when you are an entertainer. But it's been great.

I want my children to be proud of their father and to say, 'My father is the best dad in the world.' And I want them to belong to a modern family, and live a path of happiness and calm.

I had very steady and formal relationships with women. And I can say, I fell in love with women and it felt right.

Every family is different. I am mom and I am dad and I'm going to do my best. You should be proud, walk through life saying I have the coolest family. I am part of a modern family.

It was really intense for me to start having conversations with God, when according to the man-made laws in my religion - to be homosexual is evil.

I would love to do Broadway the rest of my life! Because it's challenging, because it makes me grow as an actor, as an entertainer, as an artist, and that's what I need; that's what I'm hooked on.

People don't know this, but I'm going through a lot every time I walk on stage, which is part of doing theater. That's why it's so addictive, I must say.

You just have to get rid of fear and confront the world. Look at yourself in the mirror and say to yourself, 'I love you and nothing will destroy you and you're not going to fall.'

I need to tell the world what I'm about, my nature, because not doing so would be teaching my children how to lie. I didn't want it to be.

Children aren't just our future. They're our present.

I don't need anything to live, to be honest. Give me a mattress or a futon on the floor and I'll be the happiest camper.

Anything can change in show business; you know how it goes, everything changes from one day to the other.

I've performed in China, France, New Delhi, and Indianapolis, and everybody just allows themselves to go at it and have a good time. I think that's what I'm doing through music. It's not about 'I'm from here and you're from there.' It's about unity.

I always wanted to be a father. I have a beautiful relationship with my dad and beautiful memories. I always knew I was going to have a family.

Honestly, I never needed a mask to go onstage. It was me who was there, and it was always what I felt, based on what I had learned at home, in my religion, and from society. I clung to that: 'This is me, it has to be me.' And if I had an encounter with someone of the same sex, I looked away.